“You can’t learn medicine without killing a few patients.”

Ten minutes past the hour mark of this movie, a once-idealistic doctor named Wayne Potts (Michael Sacks) looks out an enormous balcony at a never-ending cityscape. He sees ambulances and police cars tearing down dark, oppressive streets. He wonders if anything of what he does matters. All he ever wanted to do was be a small-town doctor; dispense medicine and heal the sick. He jumps.

The House of God is the greatest teaching hospital in the world. Interns who’ve studied at BMS (“Best Medical School”) are assigned to do rounds, plug holes, and practice what is now referred to as “diagnostic medicine”. Tim Matheson’s fiery, young Roy Basch negotiates half-constructed corridors on his way to orientation. In one of his first film roles, Joe Piscopo conducts the orientation. Charles Haid is “The Fatman”. He’s the guy that gets things done. He supervises the rounds of a group of newly acquired interns.

A G.O.M.E.R. (short for Get Out Of My Emergency Room – patients who take up residence in the emergency room and serve as nothing more than impediments to others in need of more attention) named Ida has the unerring ability to “go to ground”, so Fatman puts a football helmet on her head, so that she doesn’t crack open her skull. Tim’s first patient is an old woman whom he assumes has died. The Fatman sets him straight – “Gomers don’t die.” The Interns bond. I think The Fatman’s purpose is to remind these young Interns on a daily (sometimes hourly) basis that what they do matters, and that they should take care of themselves before worrying about others.

I’m reminded of my review for WarGames, in which I discuss the concept of futility, and how computers will never understand it.  They just keep going, regardless of failure, intuition, hope, or chaos.  The body is supposed to give up.  The body is supposed to die, but the machines keep it going, and there is the insidious undercurrent of a medical bureaucracy designed to continue collecting money from all the bodies it keeps alive, whether they want to give up or not.  The doctors who promote this system are known as “slurpers”; essentially the vampires of medical science.

The House Of God plays as a series of episodes in which these young doctors cope with the G.O.M.E.R.s, blanket administer Valium to all patients, scare patients out of their beds with threats of lumbar punctures, and suffer trials of depression and neuroses.  While The Fatman inspires the ire of the conservative medical establishment with his unorthodox practices, he is obviously respected, but because he does not approve of these new-fangled diagnostic procedures, he will never be promoted to Chief Resident. 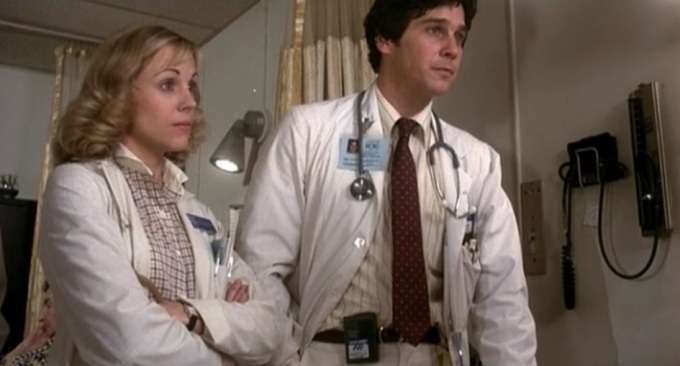 Originally shot in 1981, the film was denied a theatrical release.  I’ve heard of a number of theories as to why the movie was never released.  1. Producers claimed it was unwatchable (which it most definitely is not).  2. Harvard Medical threatened to sue (I don’t know about that one – it’s just a movie).  3. The medical community was appalled at the book on which the film was based by Samuel Shem, M.D. (why bother even shooting the movie amid such controversy?).  4.  United Artists (the parent releasing company) was too broke to release the movie (the likeliest theory).  I don’t know which, or any, of these theories is correct.  If any of the first three theories were correct, how could the movie be released to cable (eventually in 1984)?  “The House Of God” was never given a VHS, Beta, or Laserdisc release, which is puzzling.

The movie’s cast is extraordinary.  Haid is a joy to watch as “The Fatman”.  His character very much reminds me of Hugh Laurie’s Gregory House.  Tim Matheson proves he can flourish in a largely dramatic role.  Bess Armstrong, Michael Richards (Kramer from Seinfeld), Amazing Colossal Podcast’s Gilbert Gottfried, James Cromwell, Howard Rollins, and Ossie Davis round out the cast.  The House Of God would go on to influence St. Elsewhere (which took it’s title from a line of dialogue in the book and the movie), Scrubs, Gray’s Anatomy, and House M.D.

Starting next week, we celebrate Mel Brooks (who turns 90 on June 28th) with two weeks of Vintage Cable Comedy Classics!

Our first cable box was a non-descript metal contraption with a rotary dial and unlimited potential (with no brand name – weird).  We flipped it on, and the first thing we noticed was that the reception was crystal-clear; no ghosting, no snow, no fuzzy images.  We had the premium package: HBO, Cinemax, The Movie Channel, MTV, Nickelodeon, CNN, The Disney Channel, and the local network affiliates.  About $25-$30 a month.  Each week (and sometimes twice a week!), “Vintage Cable Box” explores the wonderful world of premium Cable TV of the early eighties.