“The summer of love meets the city of love.”

“The Monkees in Paris” was shot in two parts: the main action in June of 1967 in Paris and the wrap-around segments with James Frawley on December 24, 1967. These were the last bits of any Monkees episode filmed. Bob Rafelson wrote and directed this one, which is really more like an extended romp. There’s not a lot for me to recap here, even less than I had to work with for “Monkees on Tour.” The Imdb technical specs state that it was filmed on 35mm like the other episodes but I wonder if that is correct; this one looks like it was shot on 16mm with an outdoor film stock, even the indoor scenes shot later with James Frawley. The episode has a cinema vérité feeling, similar to the extra footage that was shot and used in the first season romps (The Monkees on the beach in the red swimsuits, the Monkees riding the unicycles). It is also similar in feel to the Mardi Gras/New Orleans/Acid trip sequences in Easy Rider (1969), which was produced by Bert Schneider and Bob Rafelson.

To start things off, Mike, Micky, and Davy have a friendly game of checkers. Peter rushes in with a threatening letter. Something about getting off the ranch and returning the microfilm, in other words a mishmash of old episode plots. The Monkees ignore the “bad guy” who sneaks up behind them. He has a mustache, a foreign accent, and the usual television clichés.

James Frawley enters the scene and breaks the fourth wall to direct them to do the “Monkees scare.” He’s playing himself as the director even though he didn’t direct this episode. The Monkees are bored and complain they’ve been doing the same thing over and over, which is a valid argument. Davy mentions that there’s always a tall heavy and a small heavy. He doesn’t mention a smart and a dumb one but that would also be accurate. Frawley tries to convince them that it’s all great and to keep going. They rebel; they’re going on vacation while he works out the show’s problems. They head for Paris and leave him in the lurch.

This does reflect the behind the scenes feelings the Monkees had about the repetitive nature of the show’s plots. In the Micky Dolenz autobiography, I’m a Believer, he wrote “Quite frankly, we were getting a little jaded with the show as it existed, Every week Davy [Jones] would fall in love with some girl or Peter [Tork] would be kidnapped by some bad guy, or some guy spy would hide microfilm in somebody’s something or other.” That is a fair statement, after looking at over 50 of these episodes, I can relate.

They were more interested in getting on with their first and only feature film, Head, which began shooting the same day this episode aired, February 19, 1968. The next day, February 20, NBC announced their fall line-up and The Monkees was notably absent. The Monkees didn’t want to continue the show in the same way; they wanted a variety show with musical guests every week, an idea that was sort of tested by the episodes towards the end of the run where Davy, Micky, and Mike got to have musical guests of their choice included. The network wanted them to continue on with the sitcom format, so there was disagreement on how the show would have continued.

After the titles, the Monkees arrive in Paris and drive scooters around until some young women catch sight of them and start chasing them. There’s no dialogue, just action and music. The very 1960’s score gives way to “Love is Only Sleeping” (Chip Douglas, Bill Martin). The streets are wet and rainy and the Monkees run through an outdoor market on foot. The young ladies chasing after them were hired models, and the Imdb doesn’t list their names. The website monkees.coolcherrycream.com however has screen captures that identify them as Carine (Davy’s girl), Véronique Duval (Micky’s girl), Françoise Dorléac (Peter’s girl), and Carole André (Mike’s girl).

In reality, the Monkees were not famous in Paris, so they were able to film scenes without any fans bothering them. They hired the girls to pretend to be crazed fans. This contrasts with their popularity in Great Britain. According to The Monkees Day-by-Day by Andrew Sandoval, they had to cancel shooting part of the series in Manchester because, according to Rafelson, “They are just too well known here.” In Paris, the Monkees were even able to take a day off and do some sight-seeing.

Back at the pad, James Frawley is on the phone with Bob (Rafelson), complaining that the Monkees left. It’s cute that they’re pretending that red phone is connected to a real phone line. Frawley suggests they put on half an hour of commercials like The Johnny Carson Show. Burn.

I wish I knew Paris but I’ve never had the good fortune to go, so there’s not a lot of meaning for most of these locations for me. The four models corner the Monkees at a drawbridge. Then suddenly, they’re at an amusement park where they ride some little tricycles. There’s no attempt at continuity or a story. They go on some more rides and now each Monkee is paired up with a girl. They ride different styles of toy cars around. The Monkees are at a flower garden, walking around holding hands canoodling with their girls. “Don’t Call on Me” (Michael Nesmith, John London) is the music.

This entire episode has a very 1960’s vibe. I mean yes, I know this was all from the 1960s but I’d give this episode the prize for most dated feeling. I don’t have objective facts for this, it’s just the atmosphere created by the way this was put together with the music and the ’60s fashions are the only element to focus on. In the episodes with plot and dialog there’s a more timeless feel because they rarely got topical. They were youthful and rebelled against authority and the status quo, and those are timeless concepts, not restricted to a particular decade. In Monkeemania by Glen A. Baker, Mike Nesmith talks about Raybert and their progressive-for-the-time ideas about how to make The Monkees innovative. “What they really wanted was a show that mirrored the times without actually being part of it.” It’s funny that Rafelson directed this one because it’s very much part of the times. [He probably did it for the free trip to Paris – Editor’s Note] Most of the time the show made fun of hippies, if anything. But in “Monkees in Paris” all these lovely shots of them walking around in nature, arm-in-arm, seem like manufactured “love and peace.” They don’t seem organic, nor does it seem that they were intended to be humorous or ironic.

“Star Collector” (Goffin/King) plays as the Monkees do some clowning around, falling face forward out of a truck trailer. They’re back on the scooters at some kind of street fair. The girls chase them around again. Davy fools around at a clothing stand. Micky gropes his girl on a stack of mattresses. Peter tries to impress his girl with his violin playing. My only real laugh-out-loud at this episode comes from his facial expressions as he strives to get her attention. Next, they’re all at typewriters. Whatever they typed and show to the girls gets them slapped. They try again and get hugs. How many Monkees would it take to accidentally type Hamlet?

Next song is “Goin’ Down” (Dolenz, Jones, Tork, Nesmith, Hildebrand). A bigger group of fans chases the Monkees through cobblestone streets with cops–or gedarmes following behind. Mike looks like he’s having a great time. The fans catch Micky at some point and try to tear his shirt off until the gedarmes break it up, two of whom are David Pearl and Ric Klein. There’s an abrupt tone change where they walk around a cemetery with organ music in the background. The music goes back to “Goin Down” and groups of females continue to chase them through the streets. Mike drives some kind of three-wheeled truck type vehicle and the other three ride in the back. Micky, Peter, and Davy scare the girls and the police by taking their shirts off. Sure, that makes sense. The four girls from before join them on the little truck. The Monkees take a boat ride with their girls and the soundtrack plays a banjo instrumental of that often-used “The Old Folks at Home” (Foster) tune. There’s a sequence with Peter and Davy in old-timey swimsuits with their girls by a pool. It would have been clever if they’d switched to black and white film for that.

The Monkees and the girls ride through the city in a jeep as the music switches back to “Don’t Call on Me.” They manage to break the hood off their vehicle and cause a traffic jam. The French must have loved them. About the song, Michael Nesmith wrote it with his friend John London in their folk singing days, before the Monkees. The version of the song on Pisces, Aquarius, Capricorn & Jones, Ltd. has an intro and fadeout that invokes a performance in a piano lounge somewhere. Micky Dolenz, Peter Tork, Davy Jones, and Bob Rafelson all participated in the ambiance recording. Mike’s vocal performance is different than usual on this song; instead of having his customary country-rock sound; he sounds like a smooth ballad singer. When I first heard the song I didn’t even recognize it as him. The four models chase the boys around and up the Eiffel tower while an instrumental “Alouette” plays. They climb all over it, making me dizzy. They all squeeze into a tiny box at one point. Cozy!

Back at the pad, the Monkees play checkers again. The scene begins the same way with Peter and the threatening letter. The Monkees aren’t having it. Mike complains to “Jim.” Frawley justifies that the actor has no mustache or accent and is asking for “the secret apple.” Mike and Micky promise to see us next week with something better.

Back to Paris, there’s a final montage of shots of the Monkees kissing and hugging the models. Micky puts a fur hood on two girls heads and pushes them together, then grins as though they were kissing. If I’m interpreting that correctly, I can’t believe that got past the censors. He also affectionately hugs an old lady, which is very sweet. There you have it, naughty Micky and nice Micky. There’s a random shot of Micky with Samantha Juste, his future wife [You are tearing me apart, Lisa! – Editor’s Note], holding him as he sleeps on a bus.

I have to admit when I used to catch the run of episodes on MTV and Nickelodeon back in the mid-eighties, I wasn’t too excited when this one came up in the rotation. I tuned into The Monkees for the funny dialogue and weird plots, to see the Monkees talk to me by breaking the fourth wall, etc. This episode is cute but it’s never going to be a favorite. As a teen I admit I did enjoy seeing them run around with the pretty girls. There is a fun romance element to it. Unfortunately the film stock they used was awfully washed out so any beautiful or interesting scenery is not getting the appreciation it deserves. My DVD’s are no improvement on how it looked on television. They did restore it on the Blu Ray box set apparently, according to the Monkees YT channel. Here’s a sample of the restoration. As I said in my intro, “Monkees in Paris” is an extended romp; it’s pretty and fun but ultimately pointless. 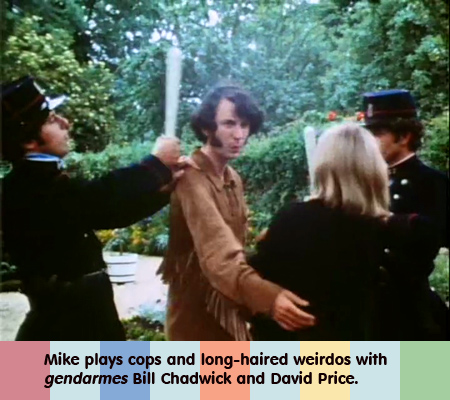